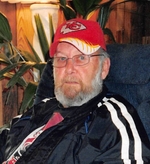 Dave was born on December 20, 1940 in Springfield, Il to Herman Frank and Irene (Baggerly) Kluge. He graduated from Fichens High School and then enlisted in the United States Army. As a teenager, he met Margaret Marie Wilson and they were married on April 16, 1963. In 1964 they moved to Independence, MO and started their family. Dave enjoyed camping at Lake Lafayette with his kids, fixing up cars, attending car shows, and The Chiefs. Most of all he loved his family, and The Chiefs. He was a member of The Eagles Club in Sugar Creek and spent Wednesday evenings at Erin’s Pub with his daughter. Dave was a huge supporter of his family, had a great sense of humor and will be missed by many.

He was preceded in death by his parents, siblings, and his wife Margaret.