In Memory of
June
Adkins (Earnest)
1928 - 2018
Click above to light a memorial candle.
Memorial Candle Tribute From
Speaks Chapels
"We are honored to provide this Book of Memories to the family."
View full message >>>
Send Flowers
Plant a Tree In Memory of Your Loved One
Click Here
Menu

In the event that there is an error
in the information presented,
please contact the funeral
home by clicking here. 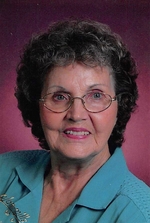 June Adkins, 89, of Richmond, MO, formally of Independence, MO, passed away at Ray County Memorial Hospital on Saturday, August 11th, 2018. A visitation will be held from 9-10am on Thursday, August 16, 2018 at Speaks Suburban Chapel 18020 E. 39th St, Independence, MO, 64055. A service will follow at 10am at the chapel. She will be laid to rest with her husband, Hugh, at Mount Washington Cemetery.


June was born in Newton, IL to Ora and Goldie Earnest on September 26, 1928. Starting her married life in Carrolton, MO she then moved to Independence, MO. June was a modest homemaker most of her adult life, always making the most of what she had. In her early years, she waitressed which was how she met the love of her life, Hugh Adkins. She also worked in a school cafeteria and clerked at a nearby pharmacy. In her later years she enjoyed crafting, quit making, and sewing. Most of all she enjoyed spending time with her grandchildren and cooking large meals for holiday get-togethers. June loved listening to country and bluegrass music and thoroughly loved watching others ballroom dance at the nearby Senior Center. June was a member of Country Meadows Baptist Church in Independence, MO. The last few years of her life she lived at Shirkey Nursing and Rehabilitation Center.

She was preceded in death by her husband, 3 brothers, 1 grandson, and 2 step-grandsons.

The family suggests that memorial contributions be made to Great Plains SPCA.